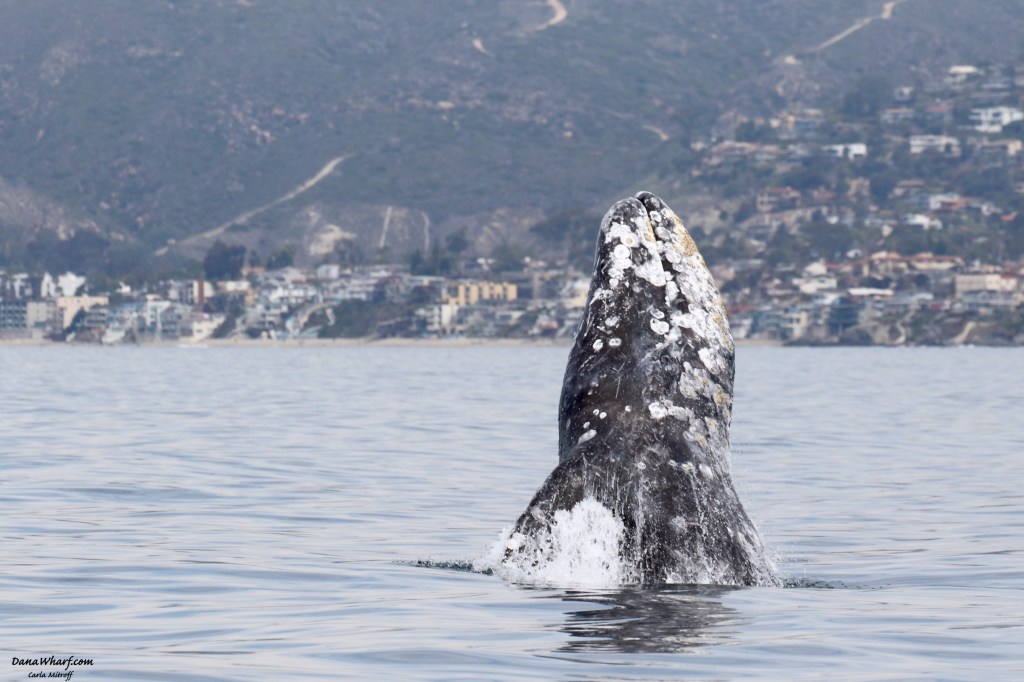 Now as captain of the R/V Sea Explorer at the Ocean Institute, he is happy to share his knowledge.

He and others at Dana Point prepare to celebrate the majestic creatures that pass along the headlands of Dana Point as guests of honor at the annual Whale Festival, a two-weekend celebration recognizing the behemoths during of their annual migration. Dana Point hosts the world’s first and oldest annual whale festival. The festival is the city’s flagship event.

The journey – 10,000 to 12,000 miles from the Bering Sea feeding ground to the warm Baja lagoons where many calves are born – is why hundreds of thousands of Southern Californians come to Dana Point early March. The migration begins in December and continues until March. At the height of the season, according to experts, 40 to 50 whales pass through Dana Point daily.

“At the Ocean Institute, here is our advice if you decide to have a whale experience from Dana Point: become the whale. See what it sees, hear what it hears,” he said. said “For two hours, experience life inside the whale.”

The 48th Annual Whale Festival – scheduled for March 2, 3 and 9, 10 – includes plenty of opportunities to immerse yourself in gray whales.

Dana Wharf Whale Watching, Dana Point Harbor’s oldest business, offers whale-watching opportunities each day of the four-day festival, from 8 a.m. to 4 p.m. Captain Dave’s Dolphin Safari and Whale Watching also offers the same opportunity. The Ocean Institute and Bursk offer whale watching tours from 8 a.m. to 2 p.m. There is also a whale watching tour offered on the cliffs of the Headlands by naturalists from the Headlands Nature Center from 8 am to 4 pm each day of the festival. .

The annual Whale Festival parade begins at 10 a.m. on Saturday March 2, starting on the Pacific Coast Highway at Selva Road and heading south toward the Lantern District. There will also be a sand sculpting contest at Baby Beach from 8 a.m. to 1 p.m. and a street fair at La Plaza Park from 10 a.m. to 3 p.m. On Sunday, March 4, there will be a whale walk at Doheny State Beach. from 9 a.m. to 2 p.m.

Activities on March 9 and 10 include a Cardboard Canoe Race at Baby Beach from 8 a.m. to 1 p.m. and Captain Dave’s Underwater Carnival. The festival will celebrate whales and the environment with a whale clean-up of a beach – Festival of Whales toasting the coast. It starts at 9 a.m. on March 10. Bring your work gloves and a recyclable bag or bucket and help clean up Doheny State Beach. Meet Park Naturalist Vicki at Lifeguard Headquarters and learn more about how you can help preserve valuable coastal resources.

The migration of gray whales, efforts to save starving sea lions and threats of entanglement by fishing gear are the topics of a series of lectures planned for the two-weekend festival. All one-hour lectures will be held at Harpoon Henry and begin at 10:00 a.m.

On Saturday March 2, Lei Lani Stelle, professor of biology at the University of Redlands, will focus on blue whales. Stelle and her team study human impacts on marine mammals.

On Saturday, March 9, Todd Mansur of Laguna Beach will also discuss gray whales. Mansur, a Gray Whale Foundation naturalist and boat captain for Dana Wharf, has spent more than 30 years on the ocean.

On Sunday, March 10, Kirsten Donald, director of education at the Pacific Marine Mammal Center in Laguna Beach, will discuss findings from the marine mammal center; including recent research, population management and conservation efforts. She will also discuss rescue and rehabilitation efforts related to whales, manatees, seals and sea lions.

“Come and share them now; too soon, they’ll be flukes on the horizon, heading north,” Bursk said.

The village of Lynwood hosts the annual festival

Companies invited to enhance the spirit of the new annual festival